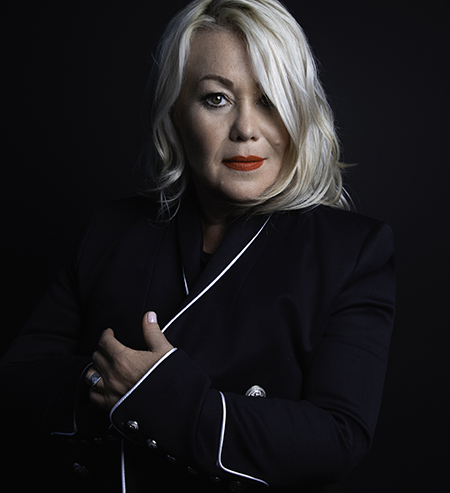 Jann Arden can bring a hall full of people to tears through song, only to have them, moments later, rolling in the aisles from her off-the-cuff comedy. Whether she’s performing her music, hosting an event or telling her deeply personal and affecting stories, Jann’s wisdom and wit shine in everything she does.

Currently starring in the wildly popular CTV show, Jann, where she plays a fictionalized, self-deprecating version of herself, Jann catapulted onto the Canadian music scene in 1993, with the release of her debut album, Time for Mercy.

Today, she boasts 19 top-10 singles and has received eight Juno Awards, including Female Artist of the Year and Songwriter of the Year. She has been recognized with 10 SOCAN Awards, four Western Canadian Music Awards, a Much Music Video Award, three Prairie Music Awards and an Alberta Recording Industry Association Award. She has been honoured with a star on Canada’s Walk of Fame and inducted into the Canadian Association of Broadcasters Hall of Fame.

Jann is the author of several books, including If I Knew Then: Finding Wisdom in Failure and Power in Aging, If I Knew, Don’t You Think I’d Tell You?, I’ll Tell You One Damn Thing and That’s All I Know, Falling Backwards and Feeding My Mother, a piercingly honest memoir of her experience with her mother, who suffered from Alzheimer’s.

Watch Jann talk about her presentation at CCSA's Issues of Substance.

Please note: Jann Arden’s talk will only be available for two days once it published to Resources section of the virtual platform.  Thank you.